My first album cover shoot with the Slugs was for “Cognac and Bologna” a name that Simon Kendall came up with as he thought it captured the essence of the band’s personality, and Doug’s writing.

In the spring of 1980 I was working as a freelance photographer for the Eaton’s advertising department and had an arrangement to use their studio in the evenings for my personal work. The day before the shoot, Doug and I wandered around the Eaton’s store borrowing props for the shoot – under the pretext they were needed for some Eaton’s ads.  We ended up with a large formal dining room table, several chairs and a pair of fancy candlesticks.

The evening of the shoot, Doug and the band arrived with groceries bags full of bread, ketchup, mustard, bologna, cognac and various other props, including the giant cognac snifter. 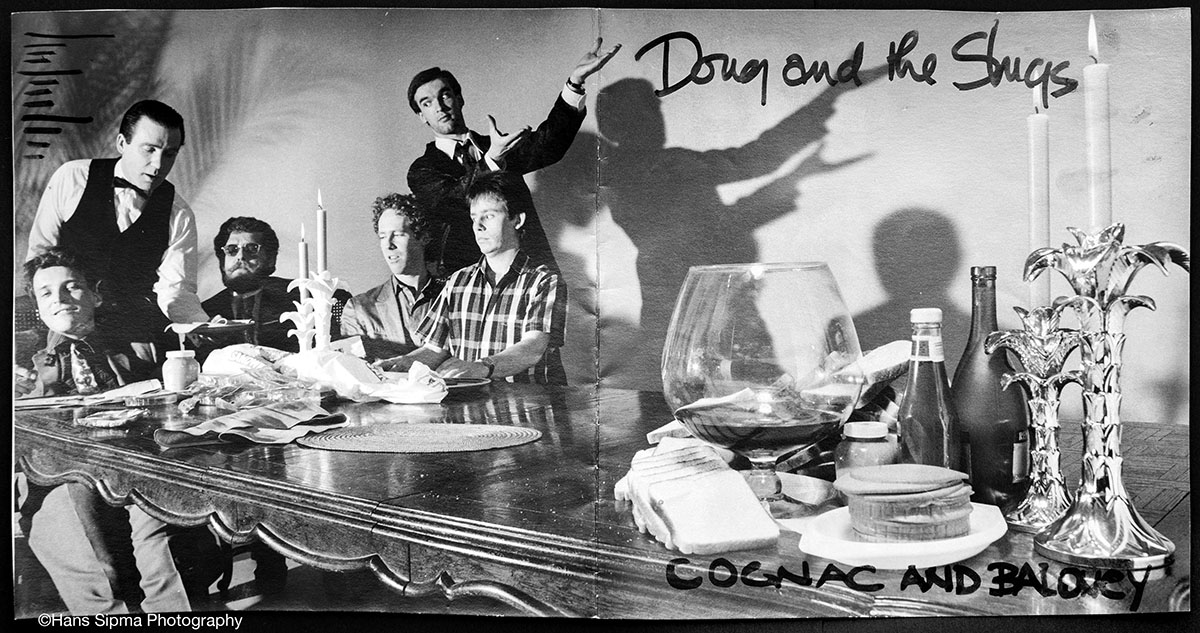 We set up the long dining room table in front of a wide angle lens and arranged the food and props on the table. Doug envisioned one photograph wrapping around from the front to the back of the album. We did a test shot on some Polaroid instant negative film and I rushed to the darkroom to make a quick print. This Doug folded in half, cut into a square and used a marker to suggest where the title and liner notes might fit. (Note the spelling of “Baloney” – that was the way Simon originally thought it should be.) Happy with the look, we finalized the props, the band got into their outfits and we did the shot. 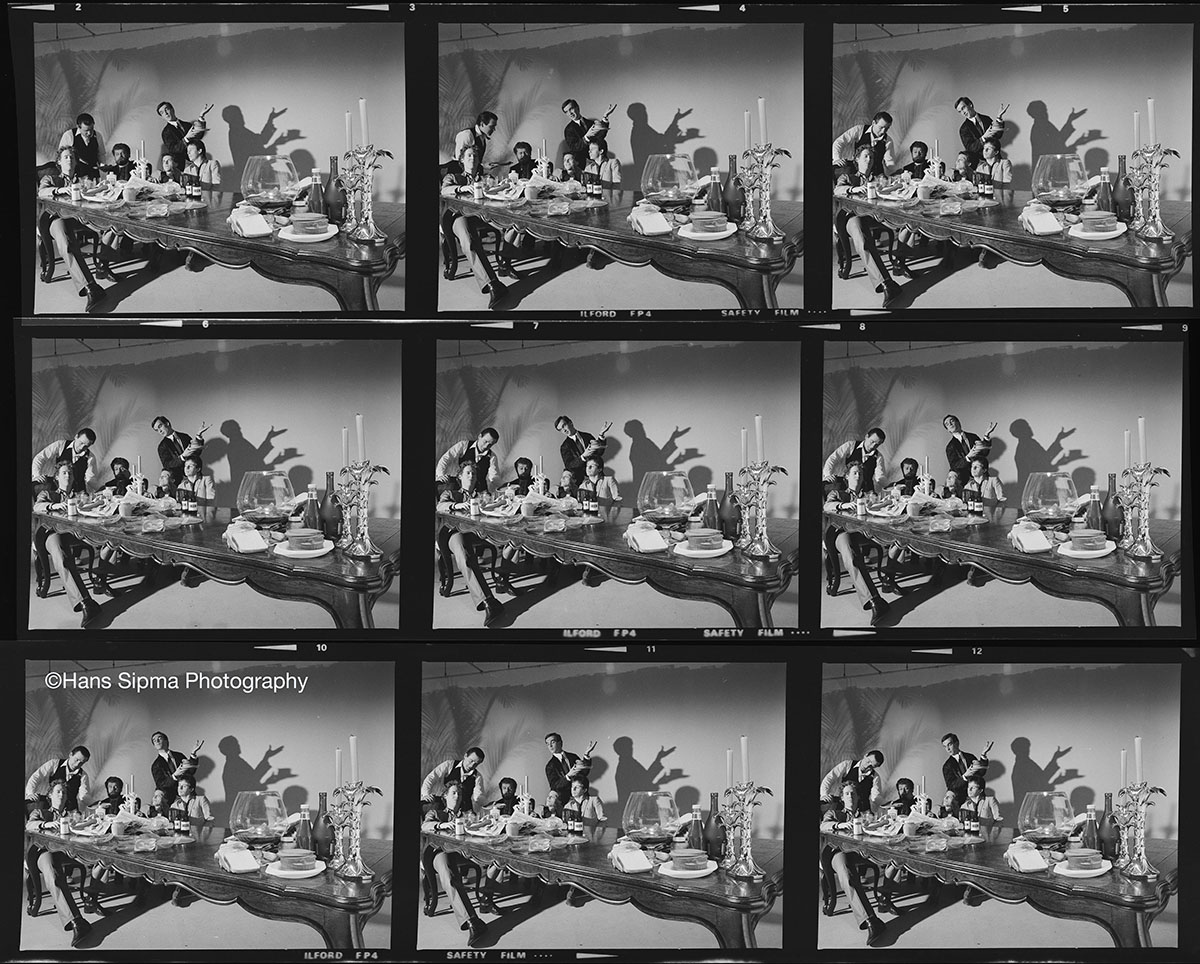 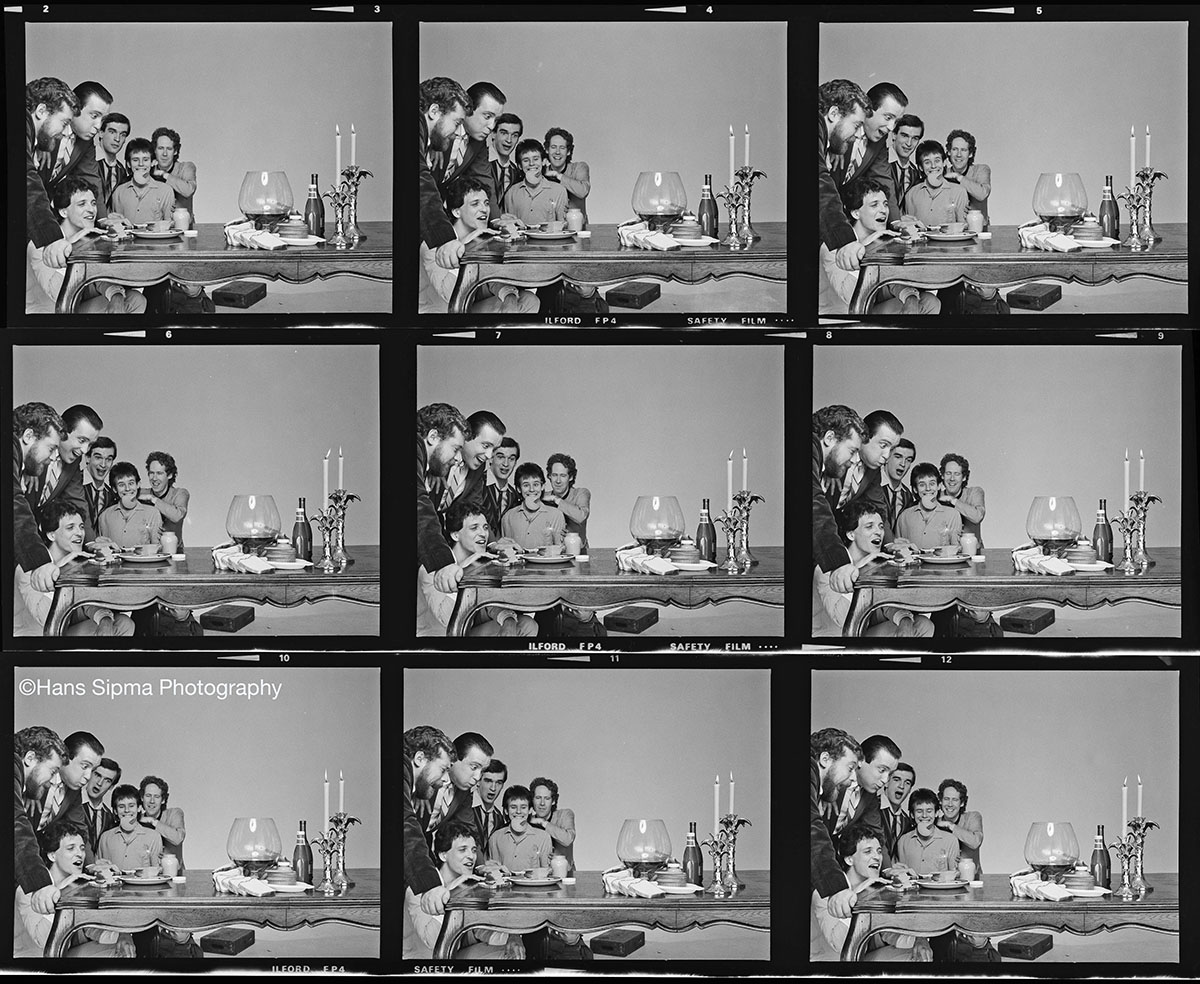 A few days later Doug called to say he’d seen the results and would like to try another version.  This time he wanted to use a 1940’s-style chrome and arborite kitchen table. I found one by asking around among fellow photographers. 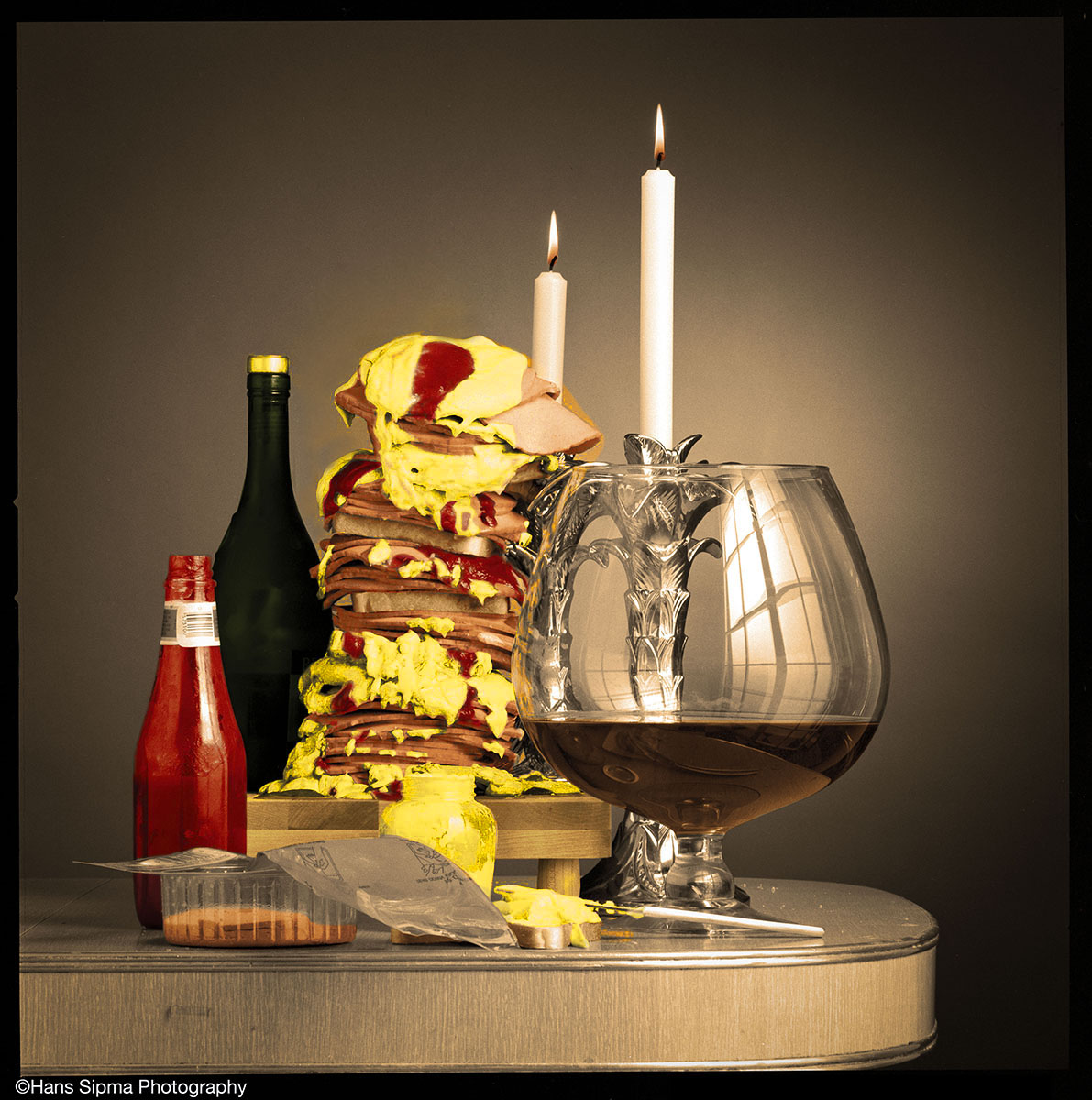 One of them said his mother had one that she used as a sewing table, so we borrowed that for the re-shoot.

To support the giant sandwich, I drilled a hole in the cutting board and stuck in a metal spike.  This allowed us to layer the bread and bologna to a great height without it falling over. The sandwich was dressed with vast quantities of ketchup and mustard. When we were finished the front cover still life, we set up the band group shot for the back cover, and for the finishing touch, we inserted sparklers into the sandwich.

I did the hand colouring using photo dyes on a sepia toned print. Doug rejected my first attempt, saying it was too subtle and looked more like a standard colour photo. I then went back and seriously layered the photo dyes to make the sandwich look as garish as possible. 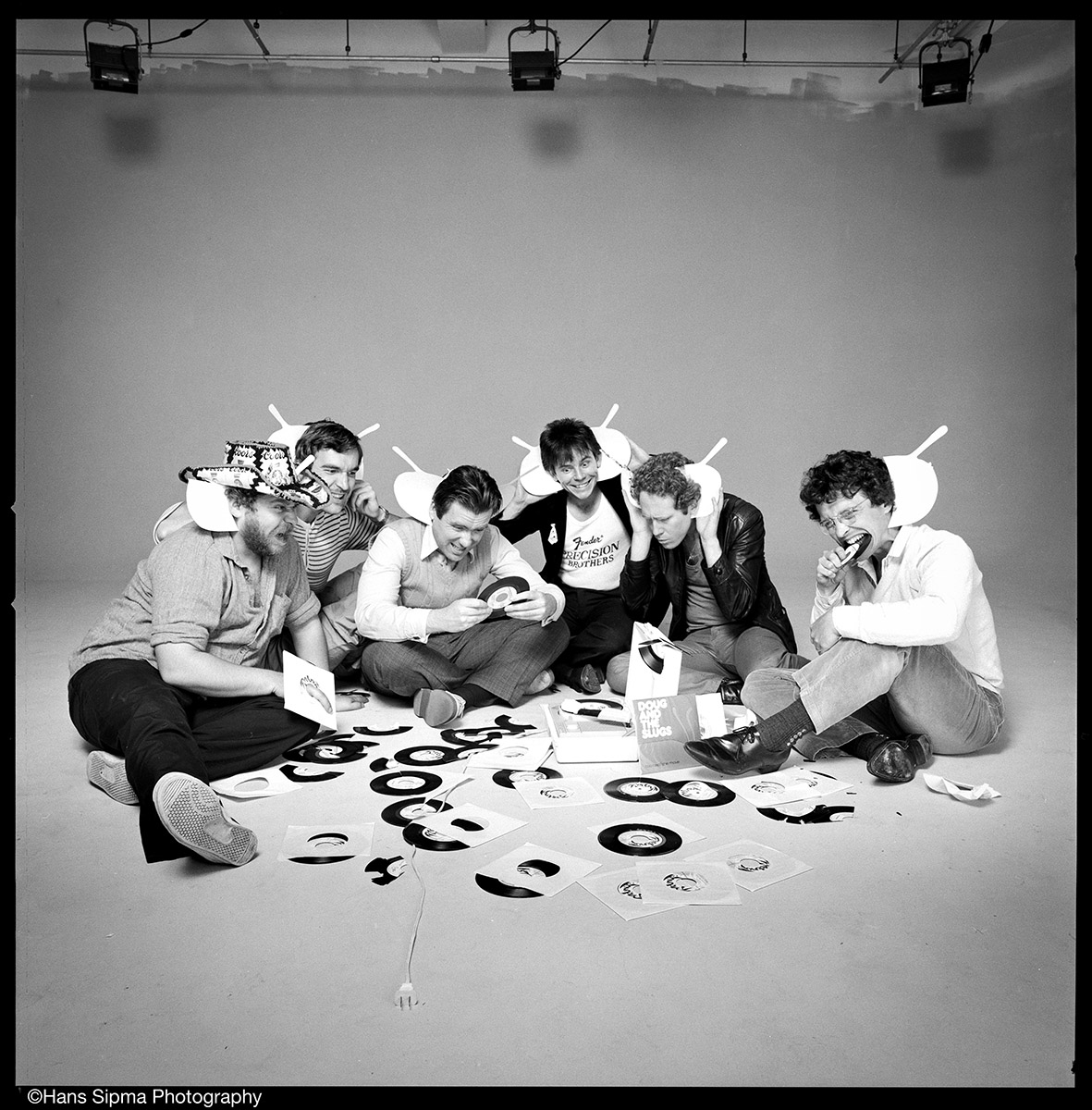 For the inside record sleeve, we shot the band using the “Slug Sound Enhancers” (which were printed on the sleeve so you had to cut them out yourself). The instructions suggested “either nailing or stapling them to your head”. Simon recalls fans showing up at Slug concerts for years with mockup Slug Sound Enhancers, fortunately without nails or staples.

“Cognac and Bologna” went on to do very well for the Slugs with over 50,000 sold – enough to be awarded a Gold Record by the Canadian Recording Industry Association in 1980. The band kindly presented me with one of the framed gold records with my name on it, which I proudly displayed in my studio for many years. 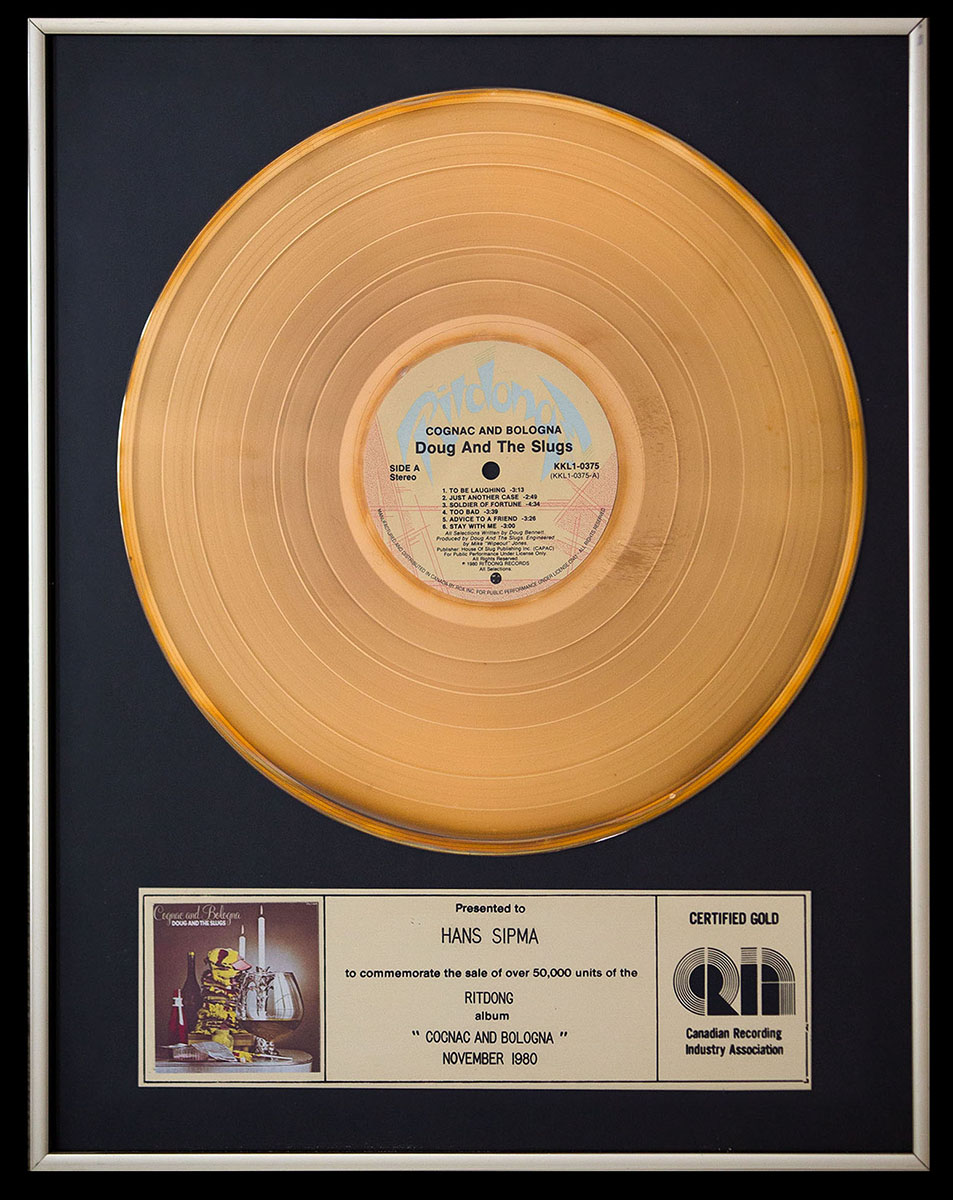