In 1984 Doug Bennett asked if I would be interested in shooting a video for the Slugs to promote the song “Love Shines” from their soon-to-be-released “Popaganda” album. He had just seen the film “The Adventures of Buckeroo Banzai (Across the 8th Dimension)” and loved the film’s odd mix of action/adventure, science fiction, comedy and romance, and wanted to bring some of those elements to his video.

The video opens by introducing “The Ritdong Rangers” and their secret base high on a mountain. It was, in fact, a 1970’s car hubcap on a mountain of grey paper with miniature trees bought at a model railroad shop. The radar dish was a reflector from one of my flash units.

All through the video we used common objects as high tech space gear. The microphone headset Doug uses was an Itty Bitty Book-light (popular in the 80’s as a small light you could attach to a book for reading in the dark). Bits of the band’s equipment are all over the set, including audio mixers, equipment cases and trusses for their concert lighting. 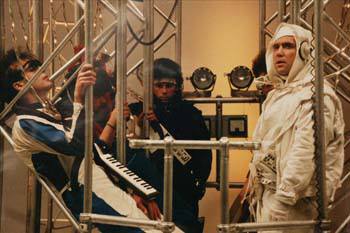 The time machine was created out of this truss work, and the lighting effects were achieved via dimmers on their stage  lights.

The time machine’s disappearance was a simple locked-down camera with a dissolve to the background after the time machine was removed.
The hippy dance was shot at the York theatre with friends and family as the extras. The evil Lord Notune ruling over the evil empire of Mordor was played by Slug tour manager and sound man Kenner (Ken Brault). His sidekick, Fredicus Minimus, was played by the diminutive Fred Michael, owner/operator of Rocky Mountain Sound. The kidnapped guitarist was played by Slug roadie Frank Felder. Fred went on to become a star roadie – working for Brian MacLeod, Aerosmith and Marilyn Manson. He later became Prince’s guitar tech.
The final ‘battle scene’ was shot at the Rocky Mountain Sound warehouse. Again a mix of friends and family showed up as extras. Denise Donlon, the Slug publicist at the time, who later became a celeb on Much Music and the CEO of Sony Canada, made a cameo appearance. Simon’s daughter Erin was a princess and Doug’s girlfriend and future wife Nancy played a warrior.
Although shot on 16mm film (expensive at the time due to film costs, processing, camera rental, editing, and transfer to video), the video definitely had a shoestring budget. My fees were waived in return for having the band perform a surprise set at the grand opening party for my new studio a few months later.