In 1988 Doug asked if I would shoot the video for the single for the Slugs’ next album, “Tomcat Prowl”, which he would direct.

The video was shot guerilla-style over a three-day period. The idea was to show Doug

working at various less-than-favourable jobs.  A band member knew someone who worked at a fish plant so we arranged to shoot one of the scenarios in their facility. With minimal lighting and a hand-held 16 mm film camera, we were able to shoot the sequence quickly with a minimum of disruption. The song was played back from a Sony Walkman in Doug’s pocket to a set of mini headphones so he could lip-sync along.  All the audio was manually synced to the video at the editing stage as none was recorded on camera.

While we were shooting in the fish plant, members of the Slugs road crew went on ahead to ask permission to shoot at the United Poultry Company and Terminal City Ironworks, both in East Vancouver. (10 years later, that same foundry became a film set for several movies and TV series, including Dark Angel, Catwoman, Superman and, finally, Deadpool – before being torn down for a new development.)

We wanted to shoot at the foundry while they were doing a casting pour, so Doug, Simon and I arrived at the location at the specified time.  I quickly set up a couple of lights and started filming while molten metal was being poured in the background.

Doug and Simon wore borrowed coveralls and lip-synced to the pocket CD playback. To the workers watching, they were singing a cappella as no one else could hear the music track.

The rooftop scenes were shot at a penthouse in Vancouver’s West End. The owner, who was then the proprietor of Speaker City, recently posted his recollection on YouTube:

“One day I got a call from a client of mine, the manager for Doug and the Slugs. He said, “I hear you have a cool penthouse overlooking the beach and looking out over the islands around Vancouver”. I said “Well, yes”.  He then goes on to say that he wants to film a music video and would I mind if they did some of the shoot on my rooftop deck, to which I replied “Well, sure, but when did you have in 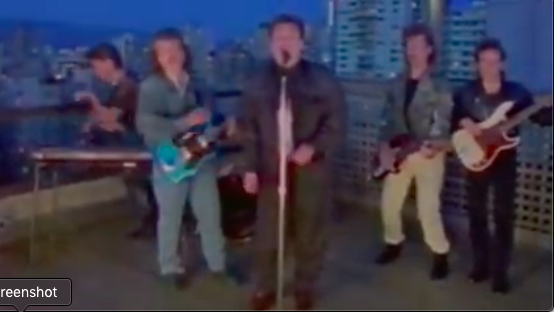 mind?”.  He says “Tonight”. “Tonight!!?”  I said “Well, OK, but I want you to put the mural that’s painted on my retail store in the video. He said “No problem”. It all worked out, and I was – and remain –  totally thrilled with the results.”

We shot a complete take of the song as the sun set over English Bay, and additional takes once it got dark. We had hoped to get the actual sun setting in the background but the clouds rolled in, so I added a little colour to the sky using a special filter. This time, playback was audio from a professional videotape player with time code displayed on a monitor. I would start by shooting the timecode and then swing the camera to the band as they started to lip-sync to the audio. That way it was easier to sync the sound to the film in post production.

Simon Kendall was not available at the time of the rooftop shoot, so a good friend of his stood in for him. He was not only as tall as Simon, but knew how to mimic his mannerisms.  What ended up on film was a close, if somewhat exaggerated, likeness of Simon.

The kitchen scene was shot at the Steel Monkey club in Coquitlam. We filled the small kitchen with stage smoke and had the whole band dressed as chefs running around Doug as he sang.

Fir, as agreed with the condo owner. John had no playback, but mimed his way through the solo.  The truck that stops in front of the camera with the guy waving was a happy accident.

All the on-stage footage was shot at the Steel Monkey during a live performance by Doug and the Slugs.

Doug worked with an editor to assemble the video so I didn’t see it again until it was finished.  It was three long, intense days  of shooting, but I loved how it all turned out.

Note: Screen shots taken in this post are amateur compared to Hans’ work- merely to match images with story.

Thank you for commenting/reaching out to Doug And The Slugs

on our ‘Let’s Connect‘ page!